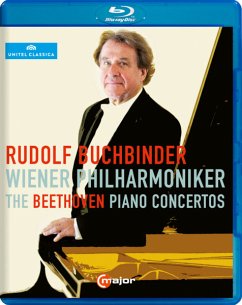 After decades of work on Beethovens original scores, the Austrian pianist Rudolf Buchbinder offers a definitive interpretation of all Beethovens piano concertos in this series of live recordings of his ecstatically acclaimed performances in the Musikverein Vienna from May 2011. Buchbinder conducts the Vienna Philharmonic from the keyboard and achieves a rare degree of tension and chamber-like concentration. Rudolf Buchbinder is firmly established as one of the most important pianists on the international scene, he is a regular guest of renowned orchestras such as the Berlin Philharmonic, Vienna Philharmonic, New York Philharmonic, Orchestre National de France, London Philharmonic, National Symphony, and the Philadelphia Orchestra. He also has over 100 recordings to his credit. In December 2011 Rudolf Buchbinder celebrated his 65th birthday.